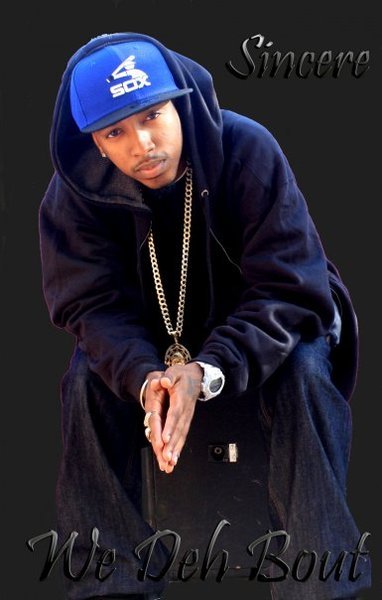 I recently had the opportunity to interview one of my favorite V.I. artists Sincere in a studio session at I-Grade Studio in Downtown Christiansted. Here’s my 1 on 1 with this talented entertainer:

Joz: Where did the name Sincere originate?

Sincere: Back in the days when we (Deh Fam) first started recording, writing, and playing around I was doing a lot of girl songs (romantic songs) and in a couple songs I used the line “I’m so sincere” and people were like you’re always with this sincere sh*t and everybody just started with Sincere, Sincere, Sincere and it kind of stuck… you know what I mean.

Joz: When did you make the decision to pursue a musical career?

Sincere: Well I’ve always been around music from a young age. My uncle used to produce for Desiree, Midnite, Adonai home grown albums…so,  we used to be around Glamorous Studios and then I was always messing with beats but then I started taking it more seriously around 11th grade.

Joz: The rumor is that you cater to the ladies…Is there any truth to that?

Sincere: Ummm, to a certain extent you know what I mean?… I feel like I’m real comfortable talking to females. So, I listen to a lot of females and what they’re going through.  I tend to write music towards them because of what they’ve told me.  I’ve gotten a better aspect and understanding of different feelings from females…but at the same time I like to talk about life situations. You won’t really hear me talking about too much club stuff or street sh*t.  I’ll do club and street stuff once in a while but not too much. You know what I mean?

Joz: Yeah I do…In the rap/ hip hop arena what branch do you consider your work to be?

Sincere:  Well, I consider it hip hop overall. I tend to not stick in one lane. I prefer to cover all bases that way I can attract a larger fan base; as opposed to if I stuck to club music for instance.  I feel that if I chose to stay in one lane I’d miss out on the opportunity to make deep and introspective music that makes you think a lot…You know what I mean?

Joz: Who are your major influences?

Sincere: Umm, my uncle Ira Hewitt, Jr., I also like Bob Marley, Jay-Z, Nas, Tupac, Biggie those artists have influenced me…they stick to the real hip hop and essence of the music.

Joz: When you perform which of your songs do you include in your set?

As far as the group goes the song by SK called “Gun Talk” is a favorite. I personally, like to perform the “How Low Remix” the girls love that…“Good Girl” and the “Hard” Remix are also songs that I include in my set.

Joz: Who do you currently listen to that’s mainstream?

Sincere:  Right now, I listen to J. Cole, Joe Budden, Jay-Z, and Drake here and there. I like a lot of the upcoming artists like Wale and the artists that speak things that make you think, with stories that make you wonder where they’ve been all the while (laughs)… and I wonder how they came up with it. I don’t care too much for the dance music and the Soulja Boys. It doesn’t interest me too much.

Joz: How has your music evolved since you first began?

Sincere: When I first began it wasn’t as precise… Over time I have a developed a better sound that’s more consistent. Before I would do a verse and think it was crazy and then I’ll do another  verse and I’d listen back and I would be like damn I fell off on that verse…but now I feel it’s more consistent and the flow is on a far higher level than it was before.

Joz: You’re a part of Deh Fam what do you bring to the group that sets you apart?

Sincere: I bring a deeper aspect. In the group like you’ll have the street lyricists which are Shiest and SK. I’ll have more stories and groupie lines and delivery that are on another level. I’ll just have more laidback stuff with a lot of focus on the ladies and life stories that people can relate to…you know.

Joz: What is the biggest challenge of being a member of a group?

Sincere: In a group you have different personalities; so you kind of have to deal with certain things.  If it was just me alone I would just have to deal with me…but in the group someone may have a bad day today but we’ve been around each other from a young age so we basically help each other out. For instance, if I know Snipes doesn’t like a certain thing I can kind of interject and cut it off ‘because I know Snipes. So I’ll be like Snipes isn’t into this or that…we tend to have fewer issues but if we do have issues we suppress it real quick ‘cause we all grew up together.

Sincere: To be as successful as possible…To make as many connects as possible and to leave an impact on the music industry and entertainment world.

Joz: As a solo artist how have you nurtured your career?

Sincere: I have basically been writing a lot…My mission right now is to really record as much as possible and by doing so I will remix as many songs as possible… that way every time I write I get better. The more I record mixtape tracks it prepares me for my original songs and it’ll make me much better lyrically.

Joz: How do you acquire musical inspiration?

Sincere: Ummm, to me musical inspiration comes from all over. I’ll be driving down the road and I’ll see a lady struggling with her bags and a child…This will lead me to consider what she goes through on a daily basis. Then, I’ll start writing a song towards that or I might go to the club and see four girls getting drunk and one dude goes home with 4 of them… and I’ll  think of a story like, I wonder what could’ve possibly happened and I’ll create a story for that. Anything can be an inspiration basically.

Joz: Let’s say you’re in the middle of writing a song…Do you need to hear a beat 1st or do you write and have the track based around your flow?

Sincere: I can do it both ways but for the most part I prefer to have the track, so, that way I can craft the lyrics and the flow specifically to that beat. We work with a bunch of different producers that are extremely talented; so, I might be home one day without any beats and I’ll get a concept in my head… start writing, bring it to one of our producers and then they’ll sit down build a track around it.  So, yeah it can go both ways but I prefer to write to a beat.

Joz: Do you have any upcoming projects or shows in the future?

Sincere: Right now we‘re working on a couple of projects nothing’s set in stone… MH (Masai Harris) & I are working on the”707, I’m working with Slik on my installment of We Run Da VI Series, and I’m working on my solo mixtape ‘Welcome to Sin City’. So I’ve basically been recording a lot of songs. Slik is a beast putting together mixtapes; so, I’m going to put together 15-16 tracks and let Slik do Slik. Prya and I are gearing up for the VI Summer Splash with Jeezy set for June 17-18.

Joz: Is there anyone you’d like to acknowledge for providing support?

Sincere: My whole team basically…we have a big team and we help each other in more than one way. Shoutouts to all the artists that have ever looked out for us…Benny D, Verse, & Rock City…All the promoters that have given us a chance to perform at big shows and  travel for free. Basically everyone that has supported Deh Fam, Krunkmaster DJ Slik, Jahlion Sound Movements, and I as a solo artist. All of the people that have been supporting us by buying mixtapes, commenting  on our music, performances, and requesting us on the radio…All of the local DJs and anyone that supports us  in general big respect to them.

Joz: How can fans connect with you?

Sincere: You can check me out online at:

Sincere:  Just keep supporting VI music…we come from a small place, but if you see someone trying to do something positive and you can reach out and giving a helping hand… Why not? Support all local artists, VI artists…the artists that are actually working hard. Not everyone just picks up the mic, starts rapping, and tags everyone in their videos. On the other hand if you’re really serious and this is your craft I support everybody. Yeah, keep the music going and keep it positive.

Experience Sincere on the deeper side in one of his best features  to date with fellow V.I. artist Ryan J. below: