Javier Colon: Is the Voice!

Just in case you haven’t heard Javier Colon has been declared “the Voice”! Colon was awarded the title, a contract with Universal Republic, and $100K in cash at last night’s finale of  season 1 of “The Voice.” The Voice is a reality performance show on NBC that is considered a rival of the very popular “American Idol.”

Hand picked by Maroon 5’s Adam Levine, Colon’s talent was apparent from the jump. In last night’s finale Colon took to the stage and performed “Landslide” a duet with Stevie Nicks in addition to an original song entitled “Stitch by Stich.” Judge and mentor, Adam Levine deemed the performance “one of the most beautiful duets I’ve ever heard in my life.”

Host Carson Daly announced that the voting was incredibly close, with less than 2% separating the winner from the runner up. The top  two contestants with the most votes were Dia Frampton and Javier Colon. Colon, who’s had his share of ups and down in the music industry, was emotional in his victory. With tears in his eyes, Javier shouted out “the three women behind me” who made it to the finals with him. His coach Adam Levine engulfed him in a big hug. The Maroon 5 frontman was ecstatic over Colon’s win. 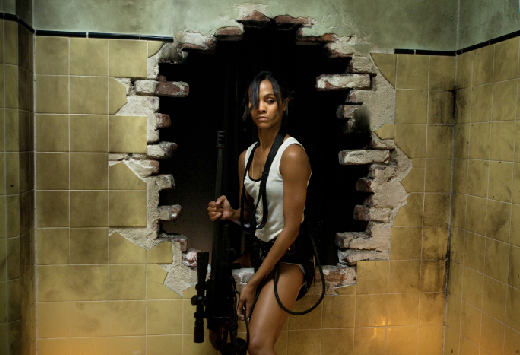 In the action film “Colombiana”, Zoe Saldana plays Cataleya, a young woman who has grown up to be an assassin after witnessing the murder of her parents as a child. Turning herself into a professional killer and working for her uncle, she remains focused on her ultimate goal: to hunt down and get revenge on the mobster responsible for her parents’ deaths.

Check out the movie trailer below:
–@JozBiz

Our favorite hardcore Latina, Michelle Rodriguez was showing her more feminine side while in Cannes.

Here are some of her amazing looks:

I, personally love the white strapless. The champagne dress is not too bad either.

Rick was pleasantly suprised when his agent called about the video saying the following,  “I’m sitting in my house, I get a call from my manager, [and] she says, ‘Lady Gaga wants you to be in the video,’ ” Gonzalez told MTV News. “I’m like, ‘Oh, cool. Lady Gaga who?’ and she’s like, ‘Rick, the Lady Gaga.’ And I’m like, ‘Wow, OK.’ And the first thing that comes to my mind and what I tell her is, like, ‘How does she know I even exist?’

As for the video controversy surrounding the video, Lady Gaga brushed it off in an E! interview stating, “This video is not meant to be an attack on religion. I respect and love everyone’s beliefs. I’m a religious and spiritual person who’s obsessed with religious art.” “I believe I was put on this earth to cause a ruckus,” she continued. “I just want to keep making stuff that’s great and thought-provoking.”

Take a look at Lady Gaga’s “Judas” video for yourself: