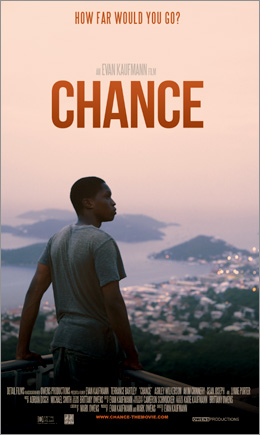 The first collaboration between screenwriter Mark Owens and director Evan Kaufmann, Chance is a sun-soaked drama that doubles as an exposé on the seedy underbelly of organized crime and human trafficking in the US Virgin Islands. Chance chronicles the actions of Darnell Smith, a young, big-hearted St. Thomian, who is the sole breadwinner for his family and whose skills as an amateur photographer have landed him a scholarship to an esteemed school in the States. But with graduation inching closer, Darnell’s mother slips closer to death from an undiagnosed disease. Lacking the funds to afford treatment and with no one to look after his brothers and sisters, Darnell forgoes school to team up with a local crime lord in a desperate move to take care of his family and save his mother’s life. Telling a tale of redemption, Chance reveals the lengths to which many have to go in order to survive and take care of those they love, but reminds us that with faith, it is never too late for a miracle.

Chance will debut in 2011 on the island of St. Thomas, USVI. As more info becomes available, it will be posted on the film website Chance the Movie as well as Twitter and Facebook.

Check out the amazing trailer for ‘Chance’ below:

For all inquires about ‘Chance’ email: ChanceTheMovie@gmail.com

CaribVue, a digital magazine, blog, and multimedia site that features the best in Caribbean entertainment, travel, lifestyle, and culture.
View all posts by CaribVue »